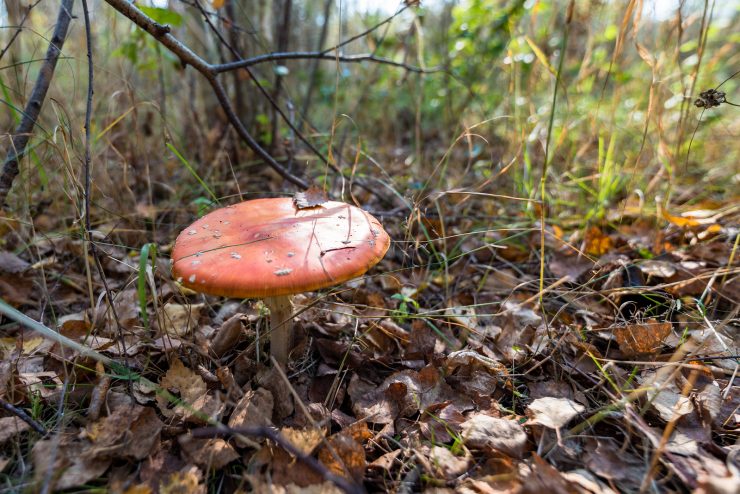 While there are harmful and harmless types of fungi, if they can be seen by the human eye, they’ve all got one thing in common: they are cringe-worthy disgusting. Seeing fungus in your compost pile may cause you to freak out. Anybody would be alarmed by the usually green, moldy, gory sight spreading over their compost. ‘Is it bad for the compost?’ and ‘Why are those little buggers in my compost?’ will be questions a lot of people would seek answers to. However, there is no reason for you to worry, so let’s get straight into it.

The presence of fungi (mushroom, molds, and yeast)  in your pile isn’t harmful. Fungi in your compost may be a sign that your pile contains a high amount of cellulose material. Fungi will help speed up the process of decomposition of organic materials. Mushrooms, for example, are high in phosphorus, copper, and potassium and contain mycelium that can break down sturdy natural materials and enrich your soil.

If you spot mushroom or mold in your compost pile, there’s no cause for alarm. However, if you insist on getting rid of it, this article will teach you all you need to know.

So, What EXACTLY is Fungi?

Fungi are eukaryotic, non-motile, hypertrophic, and non-vascular organisms that include microorganisms such as mushrooms, molds, and yeasts. They are either multicellular or single-celled and consist of thread-like structures that form a mesh-like structure called mycelium.

Fungi possess a cell wall that comprises of protoplast, which is differentiated into parts like cell organelles, cell membrane, nuclei, and cytoplasm. The cell wall is made up of polysaccharides and chitin.

9 different types of Fungi found in your garden

Below is a list of nine types of fungi that can be found in your garden:

Commonly known as the magenta coral, Clavaria zollingeri is a widely distributed species of fungus. It produces pinkish-violet to purple fruit bodies. These species of fungi derive nutrients from breaking down organic matter and are typically found growing in grassland, woodland litter, or on the ground.

Commonly known as Pheasant’s back mushroom or Dryad’s saddle, this species of fungus is also widely distributed. It can be found growing in Asia, North America, Europe, and Australia. They grow in the heartwood of dead and living hardwood trees.

Commonly known as the starfish fungus, and sea anemone fungus, Aseroe Rubra has an easily recognizable foul odor. It resembles a red-star shaped structure on a white stalk covered with brownish slime. This species of fungus, which attracts flies, typically grows in grassy areas and on mulch.

Commonly known as the rounded earth star, or star of the land by natives of Brazil, this species of mushroom is found in Europe and North America. It blooms during the late summer and is considered inedible owing to its bitter taste.

Commonly known as the luminescent panellus, the bitter oyster, or the astringent panus, this species is found in Europe, Australia, North America, and Asia. They grow in dense overlapping clusters on stumps, trunks of deciduous trees (oak, birch, and beech), and logs.

Commonly known as the Column Stinkhorn, this species is commonly found across the Gulf Coast. They grow alone and, on rare occasions, together closely on gardens, lawns, cultivated soil, and woody pieces.

Commonly known as the Mutinus Caninus, Dog Stinkhorn is the family of Phallaceae. They are phallus-shaped and grow on wet woody pieces and fragments. They are found in North America, Asia, and Europe during Autumn and Summer.

Although this mushroom is cute-looking, it is very poisonous and not edible. They are found in India and various islands in New Zealand.

Commonly known as the bamboo pith, bamboo fungus, and the long net stinkhorn, this species is commonly found in Australia, Southern Asia, the Americas, and Africa. They grow on rotten wood, woodlands, gardens, and in fertile soil.

Are mushrooms growing in my garden GOOD or BAD?

Mushrooms growing in your garden is not a bad sign. It may mean that your soil is healthy. Unlike most plants that use seeds, mushrooms reproduce by attaching their spores to a nutritious source. This source may be a dead animal, a plant’s root, or a dead plant. As long as there is air, mushrooms will grow on these surfaces. Because mushrooms do not have chlorophyll to aid in making food, they rely heavily on the nutrition of a plant to eat. Don’t take this wrongly. This does not mean that they are sucking the life out of your plant.

Mushrooms have an interesting relationship with plants. This mostly symbiotic relationship will see mushrooms rely on the plant root (dead or alive) to get sugar and all other nutrients it feeds on. In turn, it introduces the nutrients back into the soil. What’s more? Mushrooms are the ultimate composter. They will break down organic materials and speed up the decomposition process.

Can you compost mushrooms?

Yes, you can add mushrooms to your compost pile. Mushrooms stalks and peeling, when added to your pile, will speed up the decomposing process. Like yeast and molds, mushrooms are fungi that can aid in the decomposition of organic materials. Mushrooms contain mycelium that can break down the toughest natural ingredients.

Mushrooms are high in phosphorus, copper, and potassium. A portabella mushroom, for example, contains more phosphorus than a glass of orange juice. When the mushroom is added to your pile, it breaks down and enriches it. After your compost is finished and added to your garden or plant, it will also nourish it with essential minerals.

Can I eat mushrooms in the garden?

Yes, you can eat mushrooms in the garden; however, there is a caveat – not all mushrooms are edible. Some mushrooms are poisonous and can lead to death when ingested. To correctly identify edible and non-poisonous mushrooms, check for attributes like color, shape, and odor.

Below are other characteristics of edible and poisonous mushrooms:

Mushrooms under this family are both edible and poisonous. Generally, they all have a white cap, with gills ranging from black and brown to pink. They also have a stout stem with a skirt. To deduce whether or not a member of this family is poisonous, check for the smell. While edible Agarics will have a pleasant smell of mushroom with a hint of aniseed or almond, poisonous Agarics will emanate an iodine-like odor.

Members of this family have spongy pores rather than gills. These porous pores are white, yellow, and cream. To identify poisonous Boletus, check for red stains or color on the cap or stem. If there are no stains, take it a step further by cutting into the mushroom. If it turns blue, then it is poisonous and should not be consumed. If otherwise, then it is good to eat.

As its name suggests, Milkcaps (Lactarius family) have a milky substance that seems from its gills. Most of the mushrooms that fall under this family are poisonous and should be avoided. Unless you are experienced in identifying poisonous mushrooms under this family, you will do well to avoid it.

Mushrooms that belong to the Amanita family are extremely toxic and poisonous. They all have white gills and spores that grow from a volva. Members of this group are known to cause death. Except you are incredibly confident in your ability to spot non-poisonous mushrooms, steer clear of this family.

This family has a vast number of both poisonous and edible mushrooms. Russula emetica, for example, is not edible. When consumed, it will upset your stomach and cause all sorts of unpleasantness. Members of this family are easily identified by their brittle gills or stems. Owing to their versatile nature, you will do well to avoid eating this kind of mushroom.

While these tips will help you distinguish between poisonous, edible, and non-edible mushrooms, you must check with an expert that knows what he is doing before consuming it. Toxic mushrooms, when consumed, can make you sick and, in extreme cases, can cause death. Your life is very important. If you cannot get an expert to confirm its edibility, avoid eating it.

Why is mushroom growing in my compost?

The presence of mushroom in your compost bin is a sign that your pile contains a high amount of cellulose material. These organisms are encouraged by low temperatures and high moisture content in the compost pile. Mushrooms grow on leaves, plant material, or rotting wood.

How can I get rid of mushrooms in my compost?

If you do not like mushrooms and would want to get rid of it in your compost pile, ensure that a good ratio of green materials(such as food scraps) and other nitrogen-rich sources are added to your pile. Always aerate your pile with a pitchfork or shovel to disturb any mycelium that is growing in your pile. To discourage the growth of mushrooms and maintain optimum completing conditions, check your pile temperature with a thermometer.

Sometimes there just isn’t much room for mushrooms!